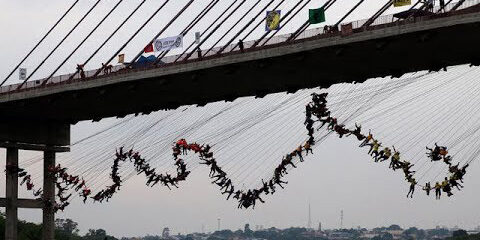 On Sunday October 22, 2017, in Hortolandia, an hour of Sao Paulo (Brazil) was held the World Guinness World Record: the most people doing bungee jumping at the same time. There were 245 Brazilians who jumped from a bridge of 29 meters of height, a record for which they used 19,000 meters of rope, 1000 harnesses and of course helmets.

Although he has not yet received confirmation from Guinness World Record, the jump exceeds the previous attempt of 149 people, also in Brazil, a little over a year ago. It also surpasses the previous record of 133 people, achieved in Tver (Russia) in 2012.