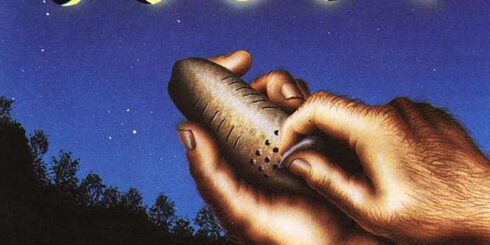 One of the Paleolithic calendars that demonstrate this hypothesis was found in the Lamiñak-II cave, a horse vertebra very well worked to be a calendar and pendant, and is now in the Bilbao Archeology Museum.

We already know that we Basques add 20 to 20 in Basque, just as the Sumerians and other advanced Indo-European peoples do. The times are counted in 20, 40 and 60 (hogeita hamar, hirurogei, laurogei, …)

In this way the age of the people is counted from 20 to 20; In today’s calendar, the signs of the sums of 40 survive, referring to key dates in agriculture (Calendario, San José Asencio,…). In addition, various paleolithic lunar calendars set times of 60 days (two moons). In this article two of these lunar calendars are presented, the first was found in a cave that we know very well in Inguru Abentura, the Lamiñak cave (Berriatua, Bizkaia) and the second in the Blanchard cave (Les Ayzies, Dordonia).

Taking into account the sum of 20 and analyzing the Paleolithic calendars, Josu Naberan proposes the hypothesis of the 15-day week, following the line of researchers P.P.Astarloa, Julien Vinson, J. Gorostiaga, J.C. baroja,…

ASTEA (week) means “the cycle of nights” and in the article published on erabili.com J. Naberan explains the meaning of the names of the week (astelehena, asteartea, asteazkena…, and all the synonyms that have been preserved in the Basque villages). In this way, instead of the three-day week, the times were measured in four times of 14-15 days (two moons), and each full moon would lead a Saturday.

The following article (in Basque) details all the details of this hypothesis: