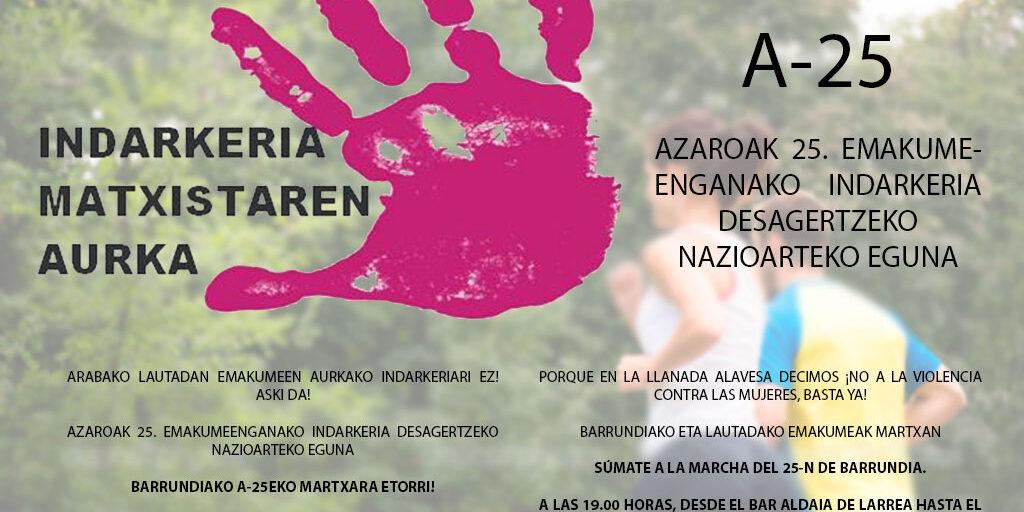 The November 25th is the International Day for the Elimination of Violence against Women. This is a significant day in which we remember the murder of women worldwide who die violently just because they are women, and in the Cuadrilla of Alava Lowland want to join this global movement.

Last year, a group of women Barrundia urge a march on 25 November. They came nearly a hundred people of both sexes, of all ages and from various points of the crew. This march was very well received and that is why this year from the same group have decided to promote it again. Consequently, it provides an excellent opportunity to re-join forces and unite everybody to this March.

We live in a society where women and men apparently have equal conditions and opportunities, but it is not a mirage. We must not lower our guard. Unfortunately this fall has been a fall in Euskadi black regarding gender violence is concerned. We must promote unity among the residents of the Plains of Alava, demonstrating the absolute rejection of such violence.

Because in the Alava plain SAY NO TO VIOLENCE AGAINST WOMEN, NO MORE!

Join the 25-PROGRESS OF BARRUNDIA.

At 19.00 from the bar ALDAIA Larrea OZAETA TO CITY COUNCIL